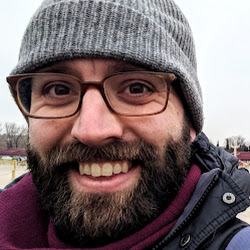 I was a student at the University of Wisconsin - Madison from 2000 to 2005. I graduated with a Bachelor of Arts degree with honors in the liberal arts, majoring in computer science, economics, and political science.

Since 2005, I have been employed at Google as a software engineer. I work in Search, where I've worked on and tech lead various teams in Search frontend, rendering, templating, UI infrastructure, the Google Android app, Closure Library (Google's JavaScript library) etc. Before that, I'd worked on Google Books, patents, magazines, news archives, and page creator.

While in college, I interned in both the constituent and campaign offices of former Senator Russ Feingold of Wisconsin, volunteered on other campaigns, and worked as a programmer part-time.

I live in Berkeley, California with my wife and daughter. Previously, I've lived in Oakland, San Francisco, and New York City. I was born in Milwaukee and grew up in Wisconsin Rapids.

I went to public schools in Wisconsin and went to school in Madison. I started college as a music student (in voice), but drifted away, eventually graduating with honors after five years with degrees in computer science, economics, and political science. During college, I was involved in and a coordinator for the Undergraduate Projects Lab

Upon graduating, I planned to attend law school, but instead a took a job offer from Google. I've also taken computer science courses at Stanford while working.